Screams echo around the two brothers as they look at each other and stifle giggles under wide grins.

One reaches forward and types something into the computer. The screams from the two women in the padded grey room grow louder — the brother’s soft giggles do the same.

“Hearing people scream in absolute terror in the room next to me is like music to my ears,” said Nathaniel Rossel, the eldest of the two. It tells me we did a good job,”

Around Edmonton, Nathaniel and his brother Alex are referred to fondly as the VR brothers. The two make up a company called VR Cave, a start-up focusing on virtual reality.

Their latest and most ambitious undertaking, Hospital of Horror, is currently scaring the wits out of Edmontonians in a small room provided to them by the entertainment company FunEx.

While to the naked eye the room seems plain, to the brothers — and the people consistently screaming — the room holds all the possibility in the world.

“It looks like a big empty five by five room with grey tiles on the floor,” said Nathaniel. “But when you’re wearing the headset, it’s a completely different virtual world.”

“The easiest way to describe virtual reality is being teleported into the video game,” explained Alex.

“The ambience of a haunted hospital is all there but the user has an element of safety there knowing that almost everything is virtual about it.”

To make the ‘teleportation’ happen, the brothers first have to isolate your senses.

On your eyes goes the HTC Vive headset, which will transport you to the hospital. Over your ears go noise cancelling headphones that will only allow you to hear your partner, and whatever the brothers want you to hear. Then they place a backpack on you that will allow you to be tracked by the software with no cords.

The brothers point you to a corner in the room, an elevator in your eyes, and sneak out.

Then the real “fun” begins.

To get some mighty fine scares, Alex and Nathaniel studied up on the latest in horror. They read several books on how to scare people, played indie horror games and tested their ideas over and over to figure out how to best freak out their customers.

“I knew a lot of the techniques that work in a computer game wouldn’t work in the real world, and this is really a blending of the two together,” said Nathaniel.

“Clearly, you don’t want to be doing that in a real haunted house.”

The boys say some who enter their room of horrors scream, others laugh nervously, and some, well some just stand silently — frozen by the fear. 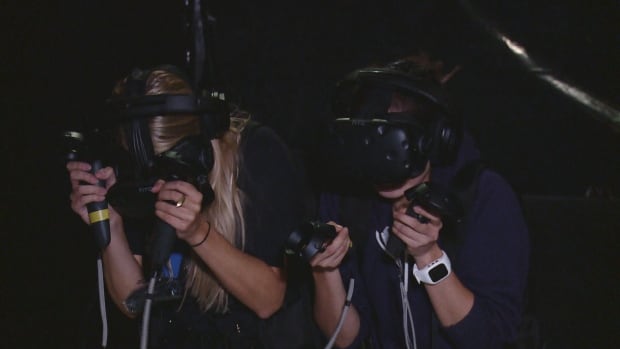 Two participants take in the virtual frights of Hospital of Horror. (CBC)

The birth of one of the most cutting edge VR experiences in the world was created in the basement of a south Edmonton home.

“All the work was done in our basement. We have some computers set up and a couple of Vive sensors in the corner,” explained Alex. “We would be typing on the computer for hours a day, just programming as much as we can, all at home.”

The two say they are pretty much self-taught in this particular avenue of coding.

Hospital of Horror was the second game developed by the brothers. The first, entitled VR Ninja, took them about eight months to develop in which they learned the ins and outs of VR development. Alex said the fact that they are brothers allows them to get work done quickly.

“The amount of communication that we need to do is far less than probably for most people, we’re on the same page for pretty much everything. We can have open and frank discussion and at the end of the day we’re still brothers.” 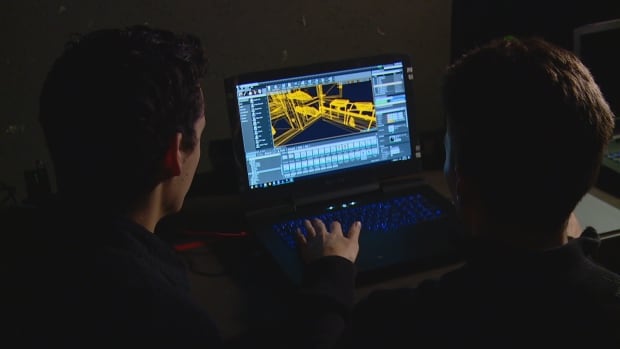 The brothers work on their creation next to the small grey room that holds their virtual haunted house. (CBC)

What sets this creation apart from the rest on the market is the fact you’re not getting the bejeezus scared out of you alone. The majority of experiences and games developed for VR are aimed at a solo experience.

The brothers decided they wanted to shake it up because for many gaming is more than just a solo experience.

The two aren’t just content to stay with their small room in FunEx. They want to expand to more rooms across the province and eventually the rest of Canada. They don’t try to hide the fact their goal is to become “Canada’s leader in virtual reality spaces.”

A few years ago, the brothers said it felt like the technology and computer power just weren’t there, but now it seems like the possibilities are virtually endless.

Which is good, because VR has been a long time passion for Nathaniel, who studied tracking human motion during his PhD.

“These original ideas, I had years ago, I started thinking ‘I think this would all work now, we could totally do this,'” he said.

New On The Blog